You May Pre-Order the Book Now 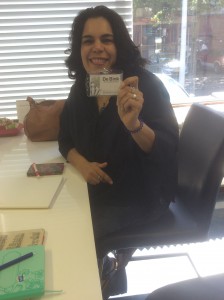 “It’s real,” Vinita said looking around her with wonder. We were sitting in our publisher’s office. Behind us giant industrial printing presses clattered continually, the noise somewhat dampened by the closed door.

Our book, A Sample of Gouda, has become within our community of friends and family a topic brought up every so often with muffled irritation and a hint humor thrown in to take off the edge. We thought it would be released in 2013 or let’s say 2014 at the very least. That’s what we thought back then. The manuscript was an almost-book, appearing in endless versions of PDFs before our eyes, and so elusive it was witnessed by few people, such as a mythical snow leopard.

To her great joy Vinita was finally at the publisher’s office with her security badge hanging around her neck and the year is 2016. The photo is proof!

“I was beginning to wonder if the book would ever be released,” joked John, the editor and support from Angloinfo South Holland as he helped swing the promotional tour in motion and emails began to scurry to and fro after handing in the final corrections (thank you Becky and Deborah). 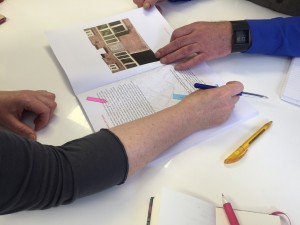 It’s so real, people can now pre-order the book! And even better, Persephone and Vinita will appear in person for a reading and book signing afternoon on June 30, 2016 in Gouda.  Location and time to be confirmed. Book costs 18 Euros, you may pre-order in two ways: reserve a copy for the June 30 book presentation in Gouda (email: apersephone@outlook.com or reserve on the Facebook event page) or through our website which calculates shipping for within the Netherlands. If you would like to have the book sent outside the Netherlands, please email Persephone.)